Perhaps the hardest part of living away from home is not being around for the special or the terrible times. Sharing some good news just isn’t the same when it has to be done over Skype or MSN. Until they invent a feature whereby you can reach through the screen and give the person at the other end of the line a big hug, there is always going to be a little something missing. As for giving bad news, that’s even worse.
As the youngest child of the family, leaving Malta meant being the last one to ‘fly the nest’. I had already moved out of home a year and a half previously but moving to Ireland meant abandoning my parents completely. I’m sure they didn’t see it that way but I couldn’t help but feel that it was my duty to be around just in case something, anything should happen. This is something that I still struggle with and I’d say that it’s the same for most people who have left their parents’ homes.
A year ago my parents had to break the news to me over Skype that my 13-year-old dog was very ill and had to be put down. Naturally, this information was heart-breaking and it was incredibly difficult to accept that I couldn’t be there to give my little Kimba one last cuddle. I knew that there was nothing much I could do even if I was there but still felt guilty about it. I’ll be honest, I cried on and off for a few days. She was a beautiful dog with a cheeky little character, incredibly well-behaved and was perfectly content so long as she had company and food. She was put to sleep on 18th November 2010 and whilst I thought a year was enough to come to terms with it, I was still quite upset yesterday. 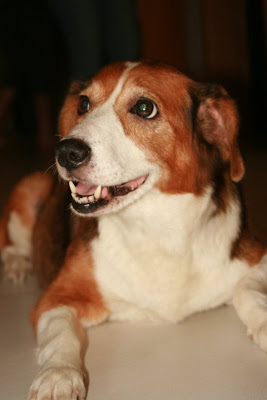 28/10/97 – 18/11/10
We miss you, Tim Tims 🙁
Now I won’t say that Kimba was “just a dog” as she was part of the family but the whole event really made me think about how terrible I would feel if something should happen to one of my parents. It’s a morbid thought, which I hate to even bring up, but we all know that these things can happen. This is the one and only reason I almost wish I hadn’t left home. I know I have my own life to lead but at the same time I feel I owe my parents to be around whenever needed. That said, they are fully aware that I love them very much and would drop everything to get home if I had to.
This same train of thought is the main reason I get anxious about my big trip next year. I guess the main way to do justice to the fact that you aren’t readily available 24/7 is to milk every moment you’re away for all it’s worth. Hard to do on a daily basis but each day is another day closer to my trip, which is what it’s all about.