5 Foods You Absolutely Have to Eat in Malta (and no, Maltesers is not one of them)

This article was originally published on OneWorld365.org

Malta: A fish-shaped speck of land spanning just over 315 km2, affectionately called “the rock” by its locals. It basks comfortably in the sun somewhere between Sicily and Libya, the Mediterranean sea lapping its idyllic shores.

Aside from a stunning climate, Malta has many virtues. It boasts a colourful history and diverse culture, having been ruled by practically everyone at some point – most notably the Arabs, Knights of St. John and the British; it is home to nine UNESCO World Heritage sites, including the world’s oldest free-standing structures; practically every beach along the coastline is worth visiting, and the locals are commended worldwide for their hospitality.

There is one special thing about Malta, however, which isn’t the first people think of but probably leaves the longest lasting impression: the food. Oh, the glorious food! Growing up in Malta I took every bite for granted. A few months into my emigration to Ireland, I realised there was a gaping hole in my life. I missed my friends and family but what I really, really yearned for was a slice of Maltese pizza.

Maltese cuisine is heavily linked to its history, with strong Sicilian and British influences, as well as Spanish, French and Maghrebin. A typical Maltese meal can convince any carb-lover s/he has died and gone to heaven, and while it’s possible to accommodate vegetarians, most menus are dominated by meat dishes. You can expect to eat plenty of pasta, pizza, seafood and fish, and chips are served with almost everything.

Given Malta’s size, few people visit for longer than a week or two, during which time it is impossible to get your mouth around every yummy morsel the island has to offer. Allow me to make your life easier. The following is a list of the top 5 things you absolutely have to eat when in Malta.

Pastizzi, called cheese or pea cakes in English, are the diamond-shaped, crispy, savoury pastries of the gods. They are filled either with ricotta cheese or mushy peas and can be picked up easily from any of the innumerable Pastizzerias around the island for about €0.30 each. Fresh, hot, cheap and incredibly tasty – score!

Fun fact: Ricotta pastizzi are cheekily shaped like a woman’s nether regions and thus the word pastizz is commonly used as a euphemism.

Ħobż biż–Żejt literally means ‘bread with oil’. You’ll find this on most lunchtime menus but it is easy enough to make yourself. All you need is a loaf of Maltese bread (crusty, sourdough bread – divine), olive oil, tomatoes and tuna. Olives and capers make a yummy addition too, as do butter beans or goat’s cheese. Drizzle the bread with olive oil then rub it with the tomatoes. A pinch of pepper wouldn’t go amiss at this stage. Next, layer on the tuna, olives, capers or whatever takes your fancy. Et voilà! I warn you it is highly addictive.

Seafood or Fish at Marsaxlokk

Being an island, the standard of seafood and fish in Malta is incredibly high no matter where you are. However, all Maltese will agree that the freshest and best of it can be found at Marsaxlokk (mar-sa-shlock), a fishing village in the south of the island. Take your pick of any of the restaurants along the seafront and tuck in.

Bonus points: Get to Marsaxlokk early on a Sunday and have a walk round the fish market for a real insight as to how fresh everything is. Don’t be surprised if it’s still wriggling! 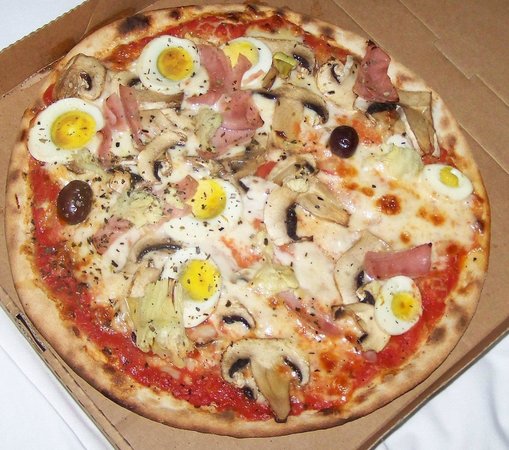 Maltese pizza is easily on par with Italian pizza. You are unlikely to be disappointed wherever you choose to have it. There are a number of small delicacies that you should not visit Malta without tasting and most of them will be served to you when ordering a Maltese platter. You can expect: Fażola (butter beans in oil and garlic), Ġbejniet tal-bżar (peppered goat’s cheese), Bigilla (a dip made of mashed beans), Maltese sausage (a traditional spiced pork sausage), sundried tomatoes, and many other wonderful nibbles.

The selection of Maltese cuisine is incredibly vast and you could eat your way through an entire holiday, which wouldn’t necessarily be a bad thing. But whatever you do, make sure you don’t leave the island without digging into everything on this list.