A Road Trip Down Memory Lane: Part I

“Good experience on the whole, especially for the kids. However, I certainly don’t think we’ll do it again.” Those were the final comments my dad made in a diary he kept over 17 years ago, which documented our two-week overland trip from England to Malta. Little did I know I would find myself retracing our steps 15 years after this was written but let’s start from the beginning, shall we?

In 1994 my parents made the decision to emigrate from England and start a new life for the whole family in Malta. For my mum it was a return to the country she had left almost two decades previously as a 21-year-old newlywed, setting out to start her own family. For my dad, who had travelled to quite a few countries throughout his time in the Royal Marines but had only lived in one, it meant settling in a foreign country for the first time. For my 13-year-old sister, Sarah, moving country earned her bragging rights within her group of friends, but later turned out to be a difficult experience. As for myself? Well, I was only 7 and I don’t think I fully understood what was happening. I knew we were going to Malta, a country we visited every Summer, and to some degree I knew that I wouldn’t be back in England for some time. This caused a few tears when it came to saying goodbye to my childhood best friend but overall I was too young to label the experience as much other than a prolonged holiday. One thing I do remember about the lead-up to this move was mum’s effort to teach Sarah and myself Maltese using a set of ‘Bebbuxu’ books. I didn’t take much in at the time, except that the word for doll was ‘pupu’. Pronounced ‘poo-poo’, this was exceptionally funny to me (again, I was 7 years old) and made sure the rest of the kids in my class learnt the word.

To this day I am not entirely sure why my parents thought it would be a good idea to spend two weeks travelling long distances on a daily basis with a child, a teenager and a tonne of luggage in the back of the car. Nevertheless, we set out on Tuesday, 12th July, 1994 with this route in mind: 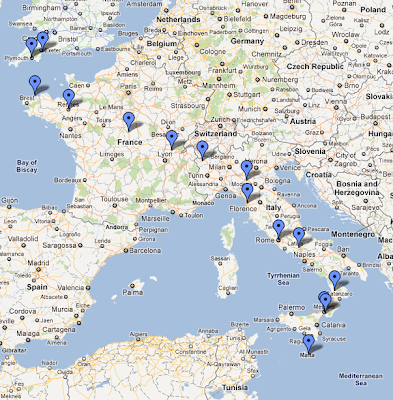 Our first day was spent driving from Exmouth to Plymouth, where we caught a ferry over to Roscoff in France. Once in France, we drove on down to Rennes and found a campsite for the night. Oh, I forgot to mention that, didn’t I? A child, a teenager, a tonne of luggage in the back of the car and two tents for sleeping in. On our first night in France I was initiated to the wonderful world of French pancakes and haven’t looked back since.

The next morning I was initiated to the less pleasant world of campsite showers. For a few francs (remember the days before the euro?) we were allowed to take a cold shower for what couldn’t have been more than 5 minutes. I blame the absolute abhorrence of camping I still have to this very day on this traumatising experience, which would be repeated in various other campsites over the next weeks. After another day’s driving and a stop-off at a château, we found a campsite in a spot 40 miles short of Bourges. Dad made an amusing note in his diary about how my mum “got very anti with the locals” here. My otherwise lovely mum has a bit of a temper on her and apparently got into an argument with a French person who refused to speak English. I have been back to France on a few separate occasions since then and it seems to me that this attitude is still prevalent. That’s all I’m saying about that…

By the end of the third day we had made our way to Bourg-en-Bresse, where the weather took a turn for the worse and we ended up spending the night in the car rather than have our tents blown away in a thunderstorm.

After just three days in France, we crossed over the border into Italy through Mont Blanc. Driving through the Alps is something I remember quite clearly despite how young I was and is a journey I would recommend to anybody. The views are incredible, as is the general stillness of the place. Another reason I recall my earliest memories of the Alps so clearly is down to the fact that my dad was stung twice by a hornet, which got trapped under his seat belt as we drove along. Painful for him, yes, but also pretty damn scary for the rest of us in the car as he swerved from one side to the other on a road which meandered round the side of a mountain. As beautiful as the views are, you don’t really want to get too close to the sheer drop that awaits on the side of the road.

Even though my poor dad thought he wasn’t going to make it through that day, we did eventually roll into Aosta, the setting for another of my more vivid memories of the trip. After sorting out a campsite for the evening, we found a restaurant for dinner and were served by a character I will never forget. In my mind I will forever picture him as a Pavarotti doppelgänger, with his immense girth, bushy beard and thick Italian accent. As we sat down to eat and my dad ordered drinks, my mum asked for some lemonade to be put in the wine. The poor waiter looked incredibly offended at this request, looked down at my mum and boomed, “Not in Italy, madam!”

Over the next two days we travelled from Aosta to Pisa, through Parma. By the time we arrived in Pisa, my mum had had enough of tents and we spent the night in a hotel. Our night in Pisa coincided with the World Cup football final between Italy and Brazil. I will never forget how silent the town became after Italy lost on penalties, except for the odd sobbing sound drifting down into the street.

By the evening of the 19th we had arrived in Rome and the driving stopped there for a few days as we explored the city. I don’t remember much of it other than the Sistine Chapel, huge crowds of people and cramped buses. Come to think of it, we didn’t have much luck with those buses. My dad was targeted by pick pockets on one, and almost got lost on another. Coupled with a bus strike on our second day there, which meant we never made it to see the Colusseum, Rome wasn’t the most memorable of places.

During our last two days in Italy, we spent time in Monte Cassino and Cosenza. I don’t remember an awful lot of the latter, but the abbey in Monte Cassino was stunning. The place also had personal significance to my dad as his own father had spent time there during the war. The image of thousands of headstones as seen from the monastery is one I won’t forget in a hurry. 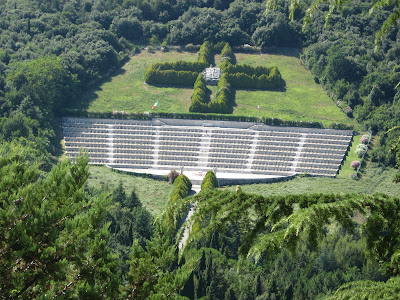 On the 23rd July we caught a ferry from Reggio di Calabria over to Messina in Sicily and carried on to Catania. My dad comments, “Driving through Catania on a Saturday evening is suicide.” We managed to get stuck behind both a wedding and a funeral in Catania and given the dodgy Sicilian driving it’s pretty easy to understand this sentiment. Not to mention the weirdos who followed us on a motorbike.

The following day we found our way to Syracuse and, after booking into a hotel for the night, found out that a ferry to Malta was leaving later that evening. After two weeks of hard graft my parents were happy to end the trip and didn’t bother to spend another night in Sicily. Late at night on the 24th July, we finally set foot in Valletta, Malta.

Being as young as I was it is quite difficult to recall anything more than random moments throughout the trip but I do know that, aside from my annual summer holiday to Malta, this was my first experience of travelling and probably one of the things that has opened up my appetite to see more of the world. This road trip also taught me that if you are going to sit me in the back of a car for too long, you are either going to have to get used to pulling over occasionally, or else will need to have a decent supply of disposable plastic bags to hand. This is a tip I took with me on my second road trip but that’s something to be discussed another day.