Click here to read A Road Trip Down Memory Lane: Part I
Fifteen years after my family and I bundled into a car and drove overland from England to Malta, I found myself back on the road again in the opposite direction. My friend Atlantis was moving to Ireland and, being afraid of flying, had decided to make the trip by car. I was more than happy to oblige as official Trip Companion (and map reader) as far as Lyon, France.
A few weeks before the trip we planned the following rough route but didn’t really go into details such as booking B&Bs, which probably turned out to be one of the biggest mistakes we made. A word of advice: if you have a good idea where you want to spend the night, it might be an idea to book a room in advance. We spent, on average, at least an hour (closer to two) every night just looking for somewhere to sleep. Mind you, not putting any bookings in place meant that we did discover a few lovely places we would never have found online. I’ll talk about the shittier ones later! 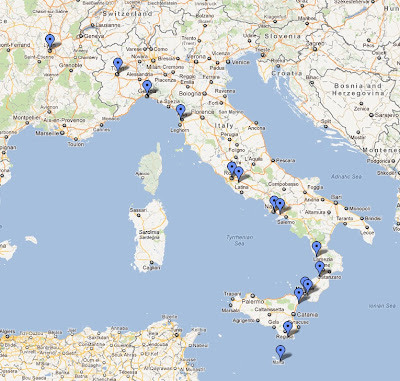 View Road Trip – Malta to Lyon on Google Maps
Another lesson learnt from this trip is the importance of keeping a travel journal of sorts. Sure, I still remember the main highlights but a lot of the detail escapes me now and it was only three years ago. That is one mistake I won’t make this time around – I plan to document my coming travels as well as I possibly can, if only to help me get the facts straight when I’m grey and wrinkly.
Anyway, without dates and times all you can do is “begin at the beginning […] and go on till you come to the end: then stop.”
Somehow Atty and I managed to find our way on a boat from Valletta to Pozzallo, Sicily at 5.30am on a bright morning in July, 2009. Despite the disgustingly early start, it has to be said that the view as we left the Grand Harbour almost made up for it. 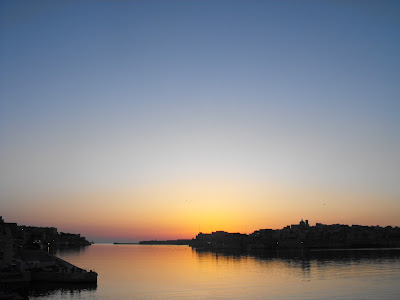 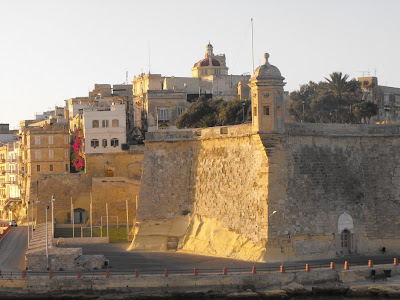 We managed to upgrade ourselves to the VIP lounge on the boat and spent the next few hours dozing in between cups of tea. Aside from the odd kid tearing through occasionally, the boat was still and quiet, and the journey uneventful. Then Sicily happened.
In my memory it seems like we left sleepy Malta and were spat out into the riotous cacophony that is Sicily. Aside from the fact that I suddenly had to get to grips with a map (Map? What the hell is a map?) and Italian road signs, Atty had to switch to driving on the other side of the road – something she forgot about momentarily until a pick-up came speeding towards us on the same side, horn blaring. Oops. We didn’t spend long in Sicily at all but it is a place I have visited before and whilst I feel no particular love for its people, the country lays claim to some undeniably beautiful scenery. As the sun crept higher in the sky, I can still remember the smell of olives and sound of crickets thick in the air as we drove by many an olive grove. 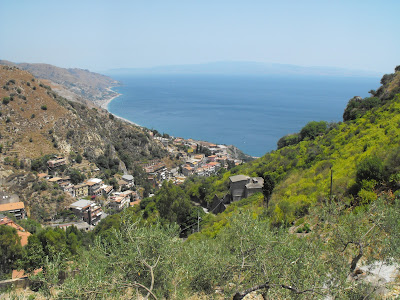 A gorgeous view from the heights of Taormina
Next stop was Messina, our link to Italy by way of yet another ferry. Messina is loud, grotty-looking and overrun by suicidal Vespa drivers. There was certainly no love lost as we hopped on to the earliest ferry and crossed over to Reggio Calabria, Italy.

Ah, Italy. There is something about Italy that makes me feel loved and fuzzy on the inside (except for Naples, I’m afraid). I can assure you that everything you have heard about its incredible food is understated and when I reach for words to describe its people, ‘warmth’ and ‘passion’ immediately spring to mind. I have been there a few times already and hope to return many more. I successfully managed to navigate us on a road along the coast and started to practice the art of Passenger Seat Photography. 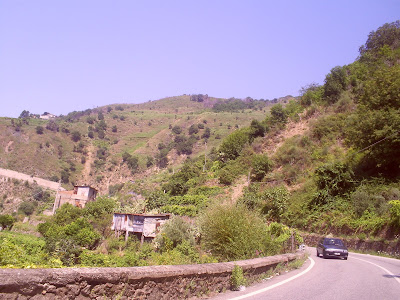 They’re on the wrong side!
We stopped off for lunch in a little place called Pizzo, where I was given the opportunity to start putting my phrase book and limited knowledge of Italian to good use. One way or another we managed to get directions out of the town and that put us back on the road along the coast. After a fair amount of driving for the first day, we pulled into a picturesque town called Paola. The town was built along a hillside and somehow we only managed to find a room in a hotel at the bottom of the hill but I suppose that was a good way to walk off the evening’s incredible plate of gnocchi. 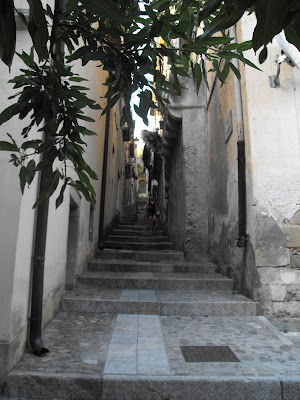 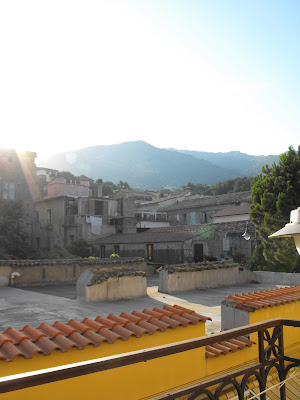 Despite the decent view from our hotel room (see above), there was something decidedly creepy about the building (Hotel Rinascente). Atty and I both swore we heard noises in the corridor and outside our door at night but we lived to see the morning. Even creepier than that, however, was my first experience of tea in Italy. Nobody had thought to warn me of this but it turns out ‘tea’ in Italy is actually lemon tea. I only understood the waiter’s raised eyebrow at my request for “latte, grazie” when I took the first sip. Ew. Later that day I bought a box of (normal, thankyouverymuch) tea bags and spent the rest of the trip asking for “acqua calda” to make my own cup of tea.

Another early morning put us back on to the coast road for a while and then through a stunning mountainous area. 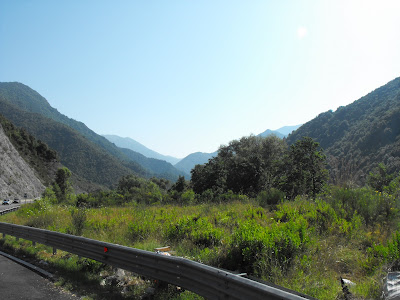 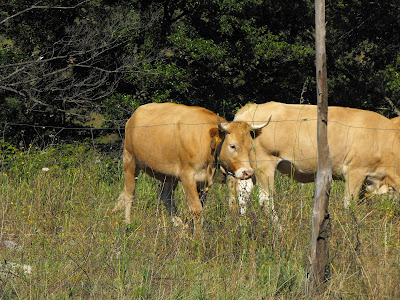 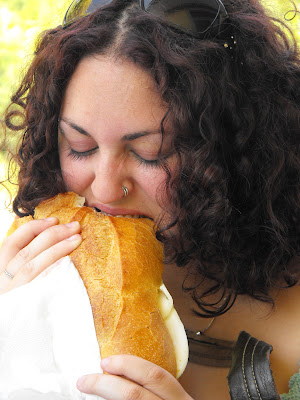 That last photo was a funny moment. At a mid-morning munch stop, I attempted to ask for a ham sandwich in my broken Italian and somehow ended up asking for a loaf of bread with ham in it. The man who laughingly handed it over to me felt it would also be fitting to then call out his little boy, who in turn had a good old ‘point and laugh’ session. Whatever; it was a damn good sandwich even though I didn’t manage to finish it.

Somehow we managed to make it to Pompeii by the early afternoon and spent a good four or five hours exploring. As a Classics student, seeing the ruins with full knowledge of Pliny the Younger’s account of the disaster was quite a haunting experience. I do regret, however, that we didn’t allow ourselves more time to visit the place. Walking around in the afternoon heat wasn’t much of a smart idea either. 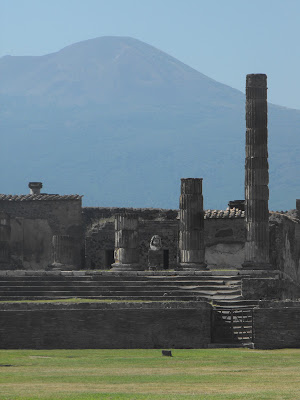 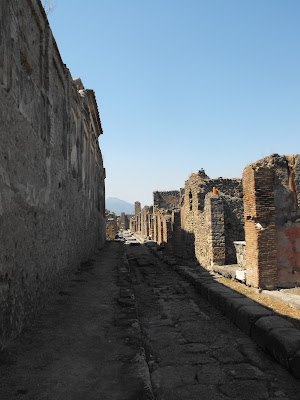 No matter where you are in Pompeii, Mt. Vesuvius is never far from sight
As our water ran out and I became hungry and cranky, we decided to head out of Pompeii. Before getting back into the car we stopped for an early dinner and discovered the ‘home of the €7 menu’: one of the closest cafes had a menu on which everything cost €7. Chips: €7. Burger and chips: €7. Trying to argue the idiocy of it with the till operator got me nothing but a shrug. Lovely!
As we finally rolled out of the Pompeii car park with the aim of getting past Naples and finding a bed for the night, little did we know that the hardest night of the entire trip was awaiting us.

But this is long enough already and that story (and the rest of the trip) will have to wait for another post!