On a relatively warm August evening in Dublin I made my way along the quays with a few a friends on a night out. As we crossed the road, I spotted Margo (as she would later be named) sat on a window sill behind some grotty-looking bars. She looked pitifully sad sat there on her own but, dressed to the nines and with someplace to be, there was little I could do about it.

As I made my way home several hours later, I spotted the barred window again and wondered what had become of the sad face I had seen earlier. Curious to see whether she would still be there or not, I made my way over to the window but before I could get there, a couple of yobbish lads ran over and suddenly Margo had been hurled into the middle of a busy road. No! There was no way I was going to pass her by again so I quickly stepped out into the road, picked her up and brought her to safety on the other side.

And that is how Margo and I became friends two years ago. 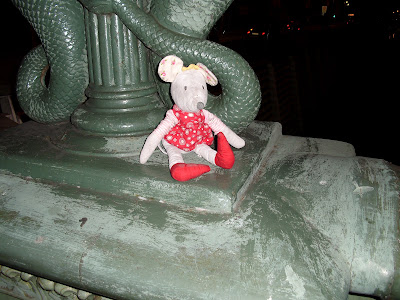 Looking a little pale after her ordeal

After a few spins in the washing machine, Margo scrubbed up pretty well and took up residence in my flat. Since then she has become my travel buddy and is as happy to discover the wonderful nooks and crannies of Dublin and other places as I am. Unfortunately, she isn’t very good at taking photos of me while we are out but is generally more than happy to sit for them herself. She’s not very talkative either but I like to think that I make up for the both of us.

Margo is pretty excited about The Big Trip and would really love to be a part of this travel blog once the actual travelling kicks off. Until then, however, she has informed me that it would probably be a good idea to get to know her audience a little better, which is why from now on she will make an occasional appearance. She has already been out and about in town and abroad, and is looking forward to sharing her Mini-Travels with you all.