Let me clarify that: I am not actually in such an awfully cranky mood that I have decided to write an angsty blog post highlighting the fact that I want people to leave me alone; I will leave that to the attention seekers who plague Facebook 😉 Rather, I mean it to be taken as a piece of good advice. Get lost: take a wrong turn, head out in your car without a clue where you’re going, or simply ignore the signs and determine your route by which turn-off looks prettiest or, if you’re as inexperienced a driver as I am, easiest.
I spent last week back on the little island of Malta to catch up with my family and friends. Having spent 16 years of my life on the island, you would think I’d have explored every nook and cranny of its meagre 300 km2 land area by the time I left. That’s not the case. As I mentioned recently, once you have explored a new place enough to establish your regular haunts, you are usually less inclined to delve any further into what the area may have to offer. That’s not everybody, of course, but probably the majority. And so I was really pleased to come away from Malta this time having visited a few places I rarely ventured to when I lived there, as well as having discovered some I had never even thought of going to before.
My friend Carla and I set out on a Sunday afternoon to watch the annual Airshow from a great little vantage point on a nearby roadside. We hadn’t really planned much for the rest of the day, except finding a nice spot in the sun by the sea. Unfortunately, the day turned out to be quite windy and the added possibility of rain dictated we find something else to do. Now here’s the thing about small islands: once you have been there long enough to grow weary of the quaint cafés and charming views, they generally become rather boring. “What shall we do?” seems to be the eternal burning question in Malta, and Carla and I were no closer to a satisfactory answer than we ever had been. Once we had seen all that was to be seen at the Airshow, we hopped into my tiny rented car with the aim of getting away from the crowd and then figuring out what to do. And that’s when the magic happened.
Despite having had my licence for two years, I have spent a total of two weeks driving a car in all that time, which means that my preferred thing to do in a car is drive in a straight line and avoid hills at all costs. Seeing as there were no easy places to pull in and decide where to go, I just drove. We hadn’t a clue where we were going but somehow we ended up in a place called Birzebbuga for tea. From where we were sat we spotted an interesting looking fort a few bays away and decided that would be our next stop. Still not really having any idea where we were going, we somehow managed to get there. ‘There’ turning out to be San Lucjan Tower: 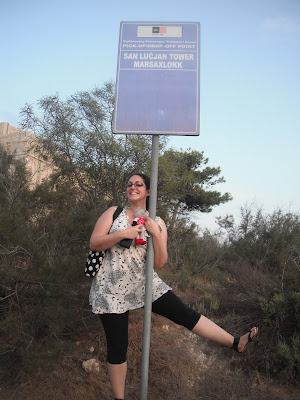 This photo was taken as proof that the place exists and that we made it there.
The getting lost thing was going well at this point so, after exploring the tower’s surroundings, we drove down a road/track opposite without a clue where it led to. We ended up in Marsaxlokk, where we had a walk along the seafront and a drink to reward our efforts. Our day of getting lost was so successful that we barely did any of what we had originally planned the rest of the week either, instead preferring to wing it and see where we would end up and I kept this up on my days with other people as well.

Mdina
So there you have it: Get lost! You just might end up having some fun 🙂