Book Review: How to Shit Around the World 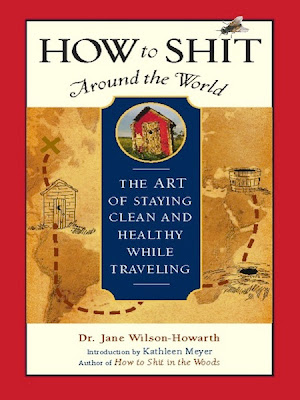 The other night at book club we were discussing what makes us choose to read a book, other than by recommendation. It’s no secret that a lot of time and money goes into designing a cover to make it more pick-up-able and then of course there’s always the blurb, written to help you part with your hard-earned cash but not necessarily to accurately describe the contents. In fact, one of our group declared to never read the blurb, preferring instead to flip through the first few pages and make his decision based on how well they are written. I, on the other hand, am a sucker for a good book title. As far as titles go, How to Shit Around the World was a pretty good way to lure me in.

How to Shit Around the World is a mix of travellers’ anecdotes and sound advice from a medical professional regarding “diarrhea, parasites, and other gastrointestinal unpleasantries that can be part of the price travelers pay for trying to see the world.” Dr. Wilson-Howarth goes into quite a bit of detail regarding what can cause these ailments and how we can pick up bugs, worms and other undesirable hitchhikers as we traverse the globe, as well as the best way to treat them or make the ‘waiting it out’ more comfortable. She writes in a clear, highly informative manner, with a good dash of humour thrown in to make the subject more easily digestible.

A large section of the book focuses on the dreaded ‘hole in the ground’ – how to approach it, use it and make your way out alive (and clean). Trips to the toilet are such a common part of everyone’s day that, if I’m perfectly honest, I hadn’t even given second thought to how it works in the countries I will be visiting later this year. As someone who is new to traveling to third-world countries, I finished the book with an absolute sense of relief that I had stumbled across it in the first place and now have an idea of what to expect, rather than being dropped in at the deep end. I also learnt a few new trivia tidbits to surprise and delight. Well, perhaps “delight” isn’t the word everyone would use.