A few months ago I wrote about a woman I met while on holiday in Malta, who spent some time talking to me about her travels throughout Africa and India. After our chat she had taken down my address and promised to send on some Rupees, which could come in handy to me. October and November rolled by and I assumed she had forgotten about this but just last week I received a card in the post with some funny little pieces of paper with Gandhi’s head on enclosed. The card said something about her having forgotten to include the Rupees in the parcel, which didn’t make much sense to me … until I came home from work last Friday to find a parcel had been squeezed through the post box and it had my name on it 🙂

Gwen was lovely enough to send me a guide book to India as well as a separate smaller one about Goa only. What made me really happy though was the following: 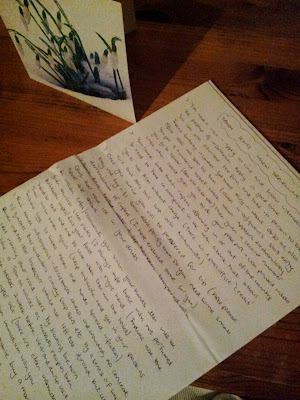 Back in the days of snail mail, handwritten letters were the way to go. I had quite a few pen pals whom I would write to on a regular basis but once email came about that all fizzled out. As it stands, before I received this letter, I couldn’t remember the last time someone had sent me one. I could very easily take five minutes to type out an email in response to this but there’s something special about actually penning a letter and therefore it deserves a proper reply.

Gwen’s letter was another reminder that I need to start putting together a rough route for the few months I want to spend in India. Everything is going according to schedule as far as saving money goes but it’s difficult to motivate myself to put more concrete plans into place when I’m not 100% certain that what I want to happen will actually come to fruition. The first two and a half months of The Big Trip are already planned but anything after that period of time is just a day dream at this point. You’ll have to forgive me for not going into too much detail about my plans just yet but I don’t want to give too much away. All the time and effort that is going into setting up this trip is a bit like having a baby and I don’t want to jinx it!

Have you spent a few months or more in India? If you have, I would love to hear from you!