This Little Piggy Went to the (Dublin Flea) Market…

Through great determination and probably a little help from some almighty being, I managed to drag myself out of bed at 7.30am on Sunday and make my way to the Dublin Flea Market. My friend Grace and I had booked a stall for the day in the hopes of de-cluttering our wardrobes and making ourselves some extra cash. We arrived at about 9am to find quite a few people already well into organising their areas and quickly busied ourselves to the task of setting up shop for the day. 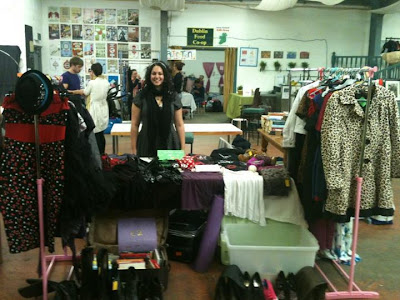 An hour later the rails were up, clothes hung, books organised, table arranged … we were open for business! Over the next seven hours, we chatted to plenty of people, sold whatever we could and generally had a good time. Given that I had only had four hours sleep the night before, I coped surpisingly well and didn’t bite the heads off any of my customers 🙂

My favourite sale of the day was a little teapot. I bought it in London over Christmas but decided it would have to go as it would be too awkward to take anywhere with me when I travel. It remained unsold until the last 20 minutes, at which point I was worrying that nobody would want to take it home and give it the love it deserved. Just as we were starting to think about packing up, a woman who had mulled over buying the teapot earlier in the day came back and decided she had to have it. Hurrah! 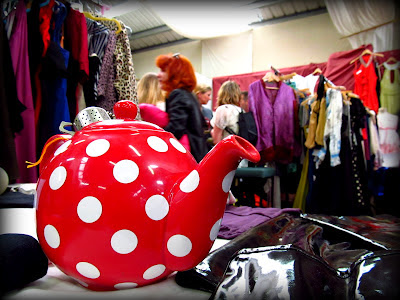 So long, teapot. You shall be missed.

The best bargain of the day would have to be my knee-high Dr Martens, which I sold for a criminal €20. They served me well throughout the snowy months in 2010 but other than that I rarely wore them so at least somebody will now get more use out of them than I have.

Last of all, the ‘Item Which Got Most Attention’ award goes to my black latex skirt, bodice and gloves – free whip included! How I came to own this outfit is its own story but it certainly got a few looks at the market. A few people were brave enough to take a closer look, try the gloves on or pick up the whip, but unfortunately no one had the courage to buy it. I suppose I shall have to hang on to it for a little while then…

I didn’t sell quite as much as I had hoped but all in all, after paying for the stall and the clothes rail, I made a healthy profit of €70. As my dad would say: Better than a poke in the eye with a sharp stick! It was a fun day out and made a change to be on the other side of the table at a flea market. It is certainly an experience I would repeat and definitely recommend it to anyone who needs a clear-out and could stand to make a few extra pennies. 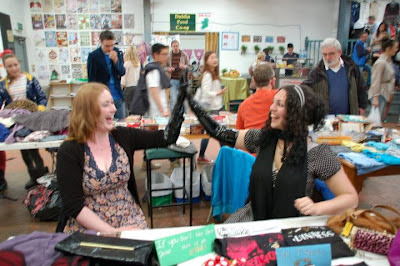 A latex high-five for a successful day at the market