Who’s Afraid of the Dark? – Why I Am Scared to Travel

I talk about The Big Trip a lot. No, really, a lot. I would apologise to my poor friends who have to talk about it every time they have a conversation with me except for the fact that it’s their job to deal with it 🙂 As I was sat down at a friend’s house last Sunday, chatting to a guest who was staying there for the week, he cottoned on to my being “the one who’s going to Africa.” Shortly afterwards he says, “Guts, eh!” which, to those of you who wouldn’t pick up on the Maltese intonation, translates to, “You’ve got guts.” He’s not the first to say something to that effect and, as flattered as I am by the sentiment, I would like to come clean by admitting that I’m actually a complete scaredy cat. I’m the girl who, for many years, wouldn’t speak to a salesperson in a shop out of shyness and would (and has) sooner cross the street than be forced into an awkward conversation with a distant acquaintance heading her way. Something changed along the way and I can now muster up the courage to answer a withheld number on my phone or ask a stranger for the time (although I still avoid the awkward conversations), however there are still plenty of reasons I am scared to travel alone.

A few things that scare me about The Big Trip:

I have nightmares about the last one.

Here’s the thing though, no matter how much the thought of some of those fears makes me want to wet myself, there is a stubborn part of me that stamps her foot and throws a hissy fit whenever I get so scared I think I might not be able to go through with it. I have come to accept that my reasons for going forward with my plans are mainly down to stubbornness and denial; if other people want to call it bravery, then who am I to correct them?

And so my plans are still forming. I’m reading, I’m saving, spending and dreaming and, most importantly, I’m getting there. 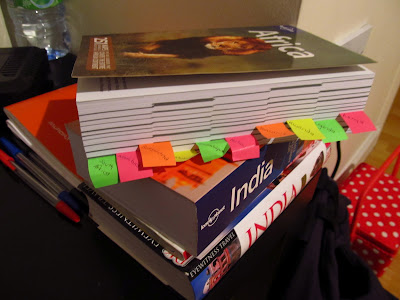 I’m doing as much research as I can so that, hopefully, should any of the above scenarios befall me, I won’t panic quite so much and will be able to come up with a gameplan quickly. Part of my research is just learning about the countries I’ll be visiting, the rest of it is reading about others’ experiences in those countries and when travelling in general. The internet is an invaluable resource in that regard.

That said, no one has mentioned a cockroach-on-face strategy. Perhaps I should put one together.